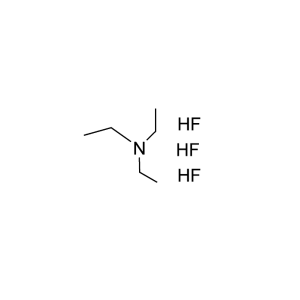 Some of the problems with HF can be minimized by combination with an amine, thereby making the reagent much less volatile and safe to use in ordinary lab glassware. Such reagents are suitable for desilylation and displacement of alkyl and aryl halides. The electron density of the fluoride anion is somewhat reduced compared to HF itself. These reagents are more effective when less electrophilic substrates are activated for nucleophilic attack. Epoxides, activated by their ring strain, convert well to 1,2-fluoroalcohols. Olefins, activated with an oxidant like NBS, convert to 1,2-fluorobromides.1 Either of these products can be converted to fluoro-olefins, which can be subsequently converted to difluorides. The same combination of reagents can convert thio ketals to geminal difluorides. Alcohols and phenols, through their intermediate xanthates, are converted to trifluoromethyl ethers.2

An important organic intermediate, Triethylamine Trihydrofluoride is used in the agrochemical, pharmaceutical and dyestuff fields, amongst others.